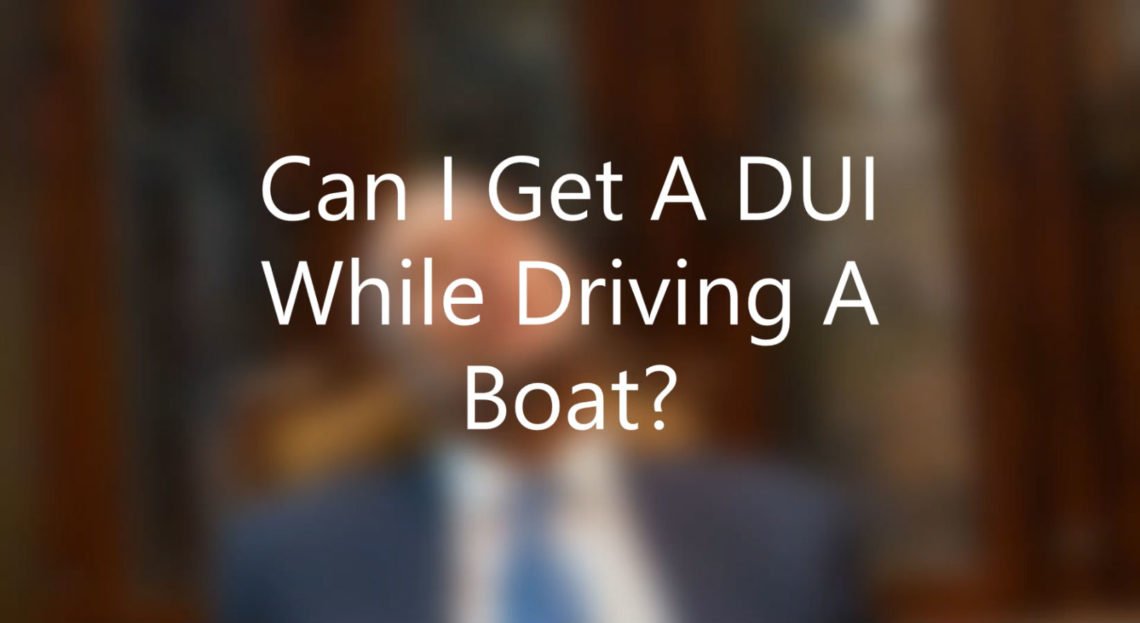 It’s a little bit of a nomenclature thing, not a DUI, but it’s essentially the same thing. It’s boating while impaired in North Carolina called BWI. Driving motor vehicles that are not on the waterway is a DWI. The way it is defined in the statue, and the way it is prosecuted around here is pretty much the same. You can be guilty of it if you have an alcohol concentration of 0.10 or more, and you’re driving/operating a boat, or if you’re impaired. If they are not able to get alcohol reading, they can testify to your impairment.

The funny thing is if you get charged with DWI, they can pull you over, and they make you do what they call standardized field sobriety test where you stand on one leg, you walk the line, and they do it hard on a horizontal gaze nystagmus test that tests your eyes. As you might imagine on a boat, that’s hard to get you to stand on one leg. It’s insignificant. They do have these crazy tests that they’ll have you do where you start with your fist in this position, and you go out like this, and then you come back in. There’s several of them that are just really funny to watch if you ever get one that’s on video. The bottom line is for a boating situation, you get pulled over on the lake, you answer the question of who you are, and if you have a boat license, you show the boat license. You show them if they’re doing a safety check, all the things that they want to see in terms of safety equipment, the life preservers, and your fire extinguisher, and that sort of thing. You don’t have to do any tests at all. You don’t have to blow on any breathalyzer.

You don’t have to do any test, and the main difference is when they arrest you and make you to the same breathalyzer test that they use for DWIs, you can refuse to blow the breathalyzer with impunity.

If you refuse for DWI, they’ll take your driver’s license. You have to go through a fight about that, but for BWI, for boating, you do not have to blow. There is no penalty to you. We’re not blowing. You should not blow on the breath test unless you’re going to blow way under. I’ve had that happen before where someone called me, and I suggested that they should not blow. They said, “Well, I think I’m going to blow under.” Well, you better be sure if you get below. Indeed, they did blow under. We still had to go to trial because they want to try them on impairment, but we won the trial because he’s blown under. If you’re not certain you’re going to be under, you shouldn’t blow a breath test.

Not worth the risk?

No, not worth the risk. Especially when you don’t do any test, think about how difficult it is for an officer to articulate the reasons why he thinks you’re impaired. You can’t have unsteadiness on your feet, and they can’t know those things. If you don’t answer any questions, and we’re doing a test, you just say, “I’m sorry. I’m not going to answer any questions on the advice of my friend who’s a lawyer.” They won’t have anything. It’s other than the odor of alcohol and red eyes. I just see no benefit to doing anything on me, but politely decline.

Even if there’s a high likelihood that you blow under, it sounds like your suggestion is: just don’t blow.

Well presumably, if you’re going to blow well under them, they’re not going to have any addition of impairment. They are not going to arrest you. If you’re being arrested, they must think they have something. I’m not sure if you want to blow. Again, if you blow and blow over, then that makes it easy for them to prosecute you because they don’t have to prove beyond a reasonable doubt that you’re impaired. They can rely on the number. That’s why you don’t just blow.