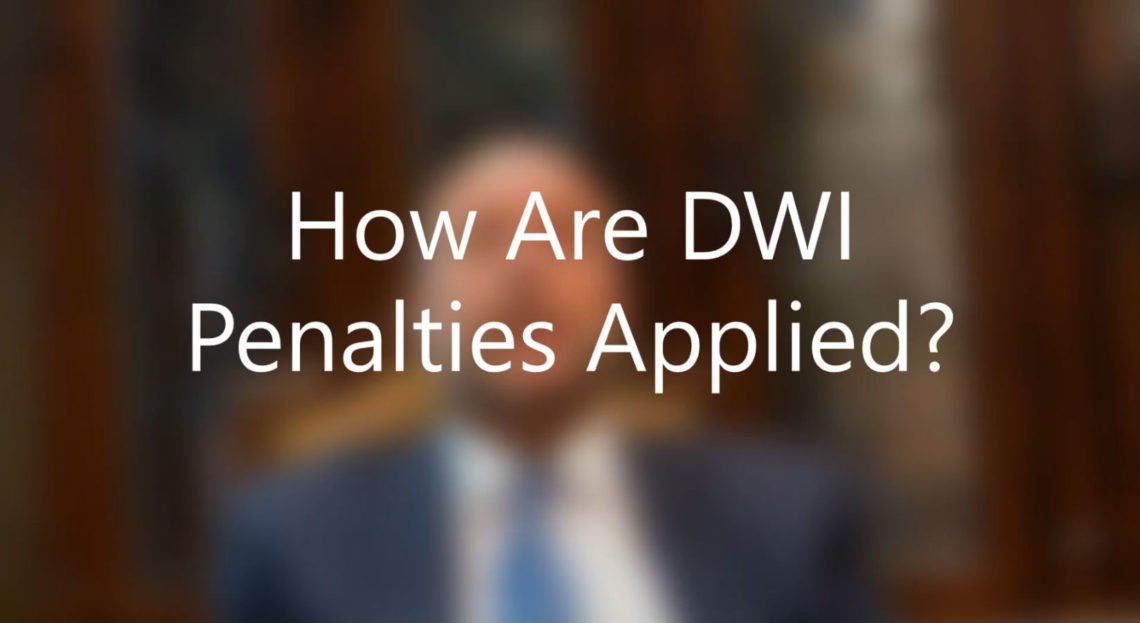 In the event, this is your second, third, fourth offense, what are some of the things that are going to specifically happen?

The punishment levels are divided numerically. The least is a Level 5, that’s the generic first offense, a low amount on the breath test, no accident, just no aggravating factor. There are a lot of mitigating factors, and that’s the least. The worst is an aggravated Level 1. That’s kind of a recent thing the legislature added on where you bear some punishment. The way you get those aggravated Level 1 and Level 2 punishments, which are the ones that have grossly aggravating factors, those are the higher ones. The 3, 4, and 5, are the person who is not much complicated about that, but for a Level 2, if you have one prior conviction of DWI within seven years, that’s the only grossly aggravating factor you have. If you have one of the other grossly aggravating factors for driving them and causing some injury, or if you have your driver’s license revoked, one of those will put you at Level 2. The Level 2 has a mandatory minimum of seven days in jail, and you can get up to a year in prison. That’s very rare. I’ve never had a client at a Level 2 get more than the minimum, and that’s one of the reasons you need lawyers, a pretty broad range of sentencing between the seven days and one year. That’s where you try to go. There’s a way now, under the fairly recent change, to even avoid the jail if you are willing to wear a continuous alcohol monitor for a period of time of 425 days and prove that you are not drinking alcohol. There’s a wait going to jail now on Level 2. If you have two grossly aggravating factors, or if you only have one grossly aggravating factor, but it is having a child under 18 in the car, in your sentence that’s what’s called a Level 1. For Level 1, it carries a mandatory minimum of 30 days to do, and there’s a way to reduce that down to 10 days by using the continuous alcohol monitor for another 20 days to show that you’re not drinking. That’s an option. In all of these cases where there’s a grossly aggravating factor involved, you lose your license for various lengths of time, but you cannot get a driving permit. You are not allowed to drive at all at any of the grossly aggravated levels of DWI.

The last one is the aggravated Level 1, that’s a real killer, and that’s if you have 3 or more grossly aggravating factors. In that scenario, you get a sentence of 1 year up to 3 years in prison. The only way that can be suspended is if you are sentenced to 120 days in jail. You will also have to have a continuous alcohol monitor for at least 120 days before the length of time you’re on probation. That’s a really big hammer for a DWI if you have 3 grossly aggravating factors.

Learn your lesson the first time is the moral of the story.

It’s interesting that time limits for the effect on how long your driver’s license is revoked are different from the time limits for your prior convictions being grossly aggravating factors. For example, you have one prior DWI, and they look back 7 years from the date you got convicted of the previous one to the date you got charged for the one you’re being sentenced on now. To get the most possible is not from when you were charged with the other one but from what you’re charged when you were convicted to the other one. You could have been charged 8 years ago to 9 years ago. For the length of time, your license is revoked, if you have a prior conviction of DWI, and the offense date for that prior was within 3 years of the date of the offense for the one you’re being sentenced on, then the length of time your license is revoked is 4 years. If it’s more than 3 years, then it’s only 1 year. I don’t know why the legislature did like that. If you have 2 prior convictions of DWI, if the most recent one was within 5 years, again, the date of the offense, then it doesn’t matter how old the third one was. Your revocation is what they call permanent. You could have one 20 years ago and then had one within the last 5 years, and your revocation will be permanent. Permanent doesn’t mean completely partly their way I can get your license back eventually. It’s pretty harsh.

The moral of that story, in that case, is always get an attorney.

Yes. DWIs have their own separate system of sentencing. Separate from all other misdemeanors and all other felonies. You need to know what they’re doing with DWIs because there’s just unlike the rest of the statues.