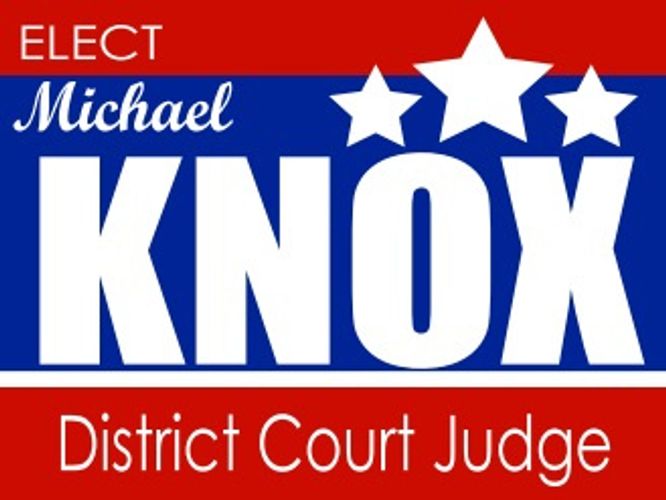 Knox Law Center is proud to announce our very own attorney Michael Knox has formally launched his election bid to the district court in Cabarrus County. Mr. Knox is running for a judicial seat in District 19A.

Born and raised in Davidson, Michael Knox began his legal career in Cabarrus County upon his graduation from law school. From 1989 to 2000 he was in private practice until taking the bench as a District Court Judge. From 2000 to 2010, Mr. Knox presided over thousands of criminal, civil and juvenile cases, balancing the facts of the case with the law to reach a fair and impartial decision. Since his return to private practice in 2011, he has advocated on behalf of hundreds of Cabarrus County residents, representing their interests before the District and Superior Courts.

Michael’s history of public service speaks for itself, and it is reflective of a family heritage of that same community spirit. His father was mayor of Davidson for 14 years, after serving many years on the town board. His uncle, Joe Knox, was Mayor of Mooresville for 26 years, and held state-level positions including the Governor’s Crime Control Commission, and president of the League of Municipalities. His uncle Eddie Knox was mayor of Charlotte and a former state senator.

“I want to continue this legacy of public service,” Mr. Knox said. “Cabarrus County is my home, and it’s a great place to live. I need your help to continue to live out my family heritage and my personal history of serving my community.” As a former judge, he understands that each case is important, and he strives to treat every person involved with patience and respect, while fairly applying the law. But that doesn’t mean he can’t make tough decisions or be tough on people who deserve it.

As the father of a son & daughter, Knox said he believes some of the most important cases he hears are in the family court, involving children. Not one of his custody decisions has ever been reversed by a higher court.

An Effective Candidate For District Judge

Knox has spent the past 29 years of his career as an attorney and a public servant, making a case for why he should be elected on November 6th 2018. While a practicing attorney, he handled cases including criminal, juvenile, civil, and domestic – the same type cases he has heard in district court as a judge.

“The work of our court touches nearly every family – from speeding tickets to custody cases. For many, if not most people, the people elected as your district court judges are far more likely to have a personal impact on your family and friends than those elected as President or Senator. For that reason I strive to allow litigants their opportunity to be heard. No matter how large or small, every case is important and receives equal attention. I have a proven record of doing my job the right way. I am dedicated to deciding each case on the merits without fear or favor, pursuant to the law. I ask for your help in continuing the important work of our court.”, says Michael Knox.

From routine hearings to cases that have been extremely complex and at times emotional, Knox has served the people of Cabarrus County for over 30 years. He’s made hard decisions without flinching, and he’s ready to continue his service.

If you need help finding your polling place this Election Day, please visit the usa.gov polling locator for more information.

DO YOU NEED A YARD SIGN? Simply email kno[email protected] your address!