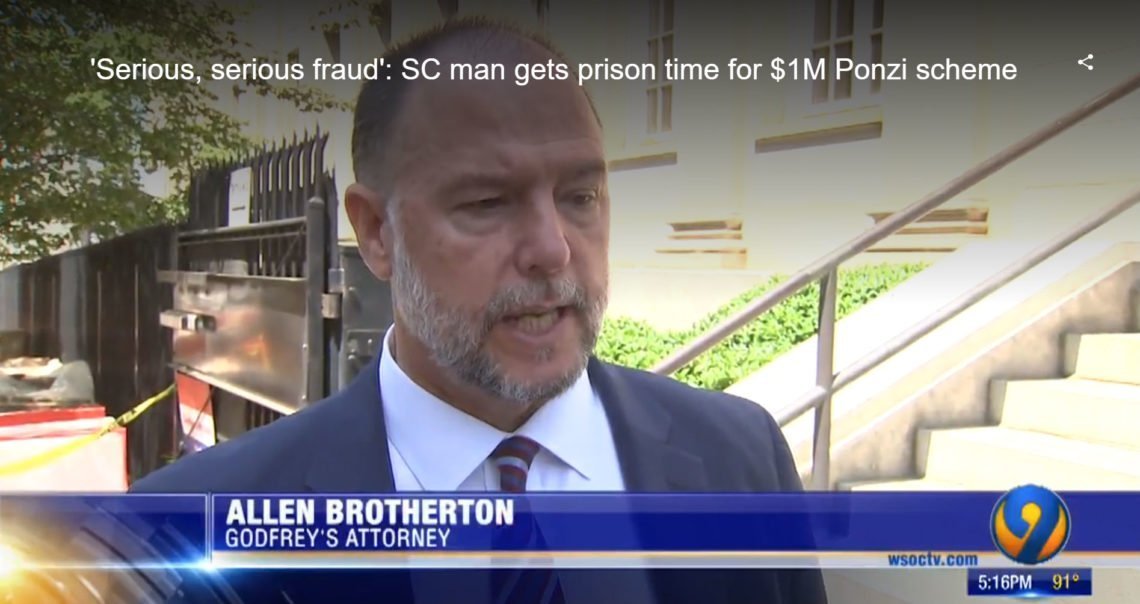 Attorney Allen Brotherton recently spoke with WSOC TV news about the aftermath of a $1 million local Ponzi scheme. After deep negotiations, the judge rejected the government’s request for a much harsher sentence and went below the guideline range to drop the penalty from 57 months in prison down to 37.

“Nickolas Godfrey was sentenced to more than three years in federal prison Monday for his involvement in a $1 million Ponzi scheme.

Titus said Godfrey was her husband’s former employee who they trusted with their money.

“He took money from our savings account we had — at first very successful. He was providing what he said he would produce so we brought in family members, we brought in neighbors,” said Titus.

Titus said in 2012 Godfrey, who owned Bliss Salon in the Blakeney Shopping Center, convinced them to invest in small businesses, some of which didn’t exist.

Federal documents show that over the course of three years, Godfrey got more than $1 million from more than 20 victims through his company, Coast to Coast Business Funding.

The U.S. attorney’s office said Godfrey used his victims’ money to pay for personal expenses and to make Ponzi-type payments to earlier victims.

When victims started to complain, documents state Godfrey began creating a fake list of clients who Coast to Coast Business Funding had supposedly paid off.

“Its just unfortunate that he was malicious and was taking advantage of people on a regular basis,” said Titus.

Godfrey was sentenced to over three years in prison for securities fraud, wire fraud and transactional money laundering. He was also ordered to pay more than $1.6 million in restitution.

“He feels terrible about what happened. He just got in over his head,” Godfrey’s attorney, Allen Brotherton, said. “The lesson is when you get in over your head, don’t try to cover up and that’s the worst thing and that’s what we did.”

Titus said, “Justice will be served when everyone gets the money back.”