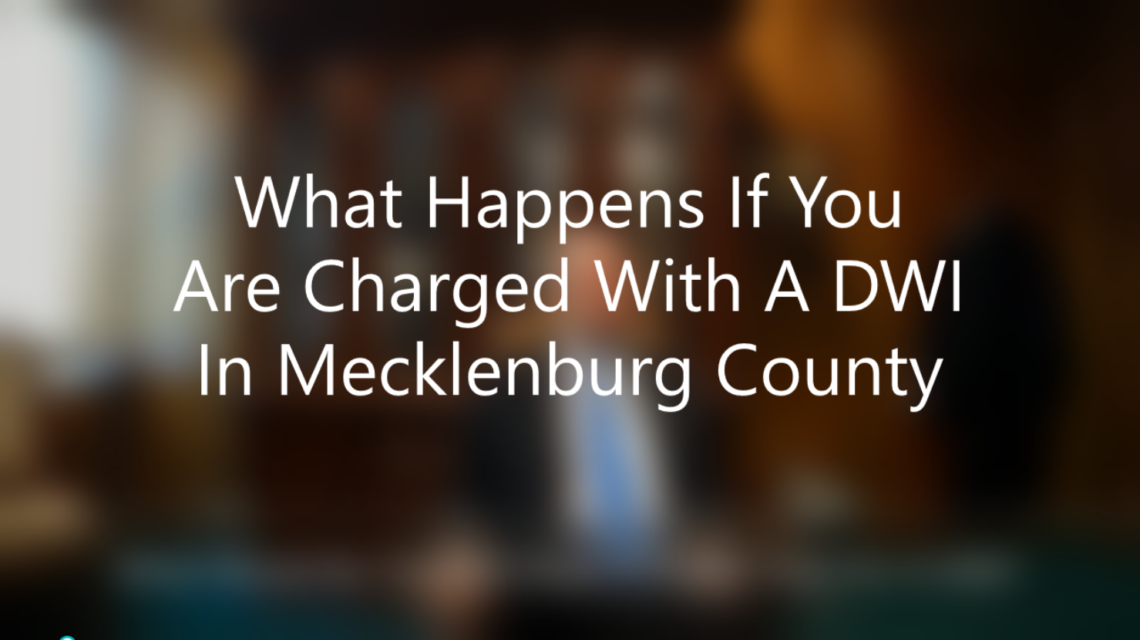 Knox Law Center attorney Allen Brotherton shares his thoughts on the local DWI process and the advantages of knowing the local Mecklenburg Court system as a criminal defense attorney. Here, Attorney Brotherton shares advice on what to do during a traffic stop, what happens if you get charges with a DWI crime, and what the advantages and costs are in hiring a competent DWI attorney in Mecklenburg County. Read on…

Q: What would be the first steps and first things that they should be thinking about when it comes to avoiding getting a ticket?

So, you have to be careful from the beginning and so, the only thing you really have to do, the only thing the law requires you to do, really, is to hand over your driver’s license and identify yourself. The rest of the actions and the questions that the police officer asks you, you can politely decline to go through with.

Now, if he asks you to step out of the car, you have to step out of the car can’t actively resist in that fashion but he’s gonna ask you, “How much you had to drink?” He’s gonna start asking you questions that nature and you can simply say, “Look, I would prefer not to answer any questions on the advice of a friend of mine who’s a lawyer.”, that’s a simple thing to say and you don’t have to answer their questions, you really don’t. And they’re gonna ask you if you will do some field sobriety test. If you will stand on one leg or walk a line or they’re gonna do what’s called the horizontal gaze nystagmus where they hold their finger or something up in front of your eyes and have you track it with your eye. They’re not looking to see if you indeed follow that stylus, they’re looking at what they call an involuntary jerking of your eye and there are clues that they look for that they would then come into court and testify are indicative of you being impaired.

So, it seems like an innocent enough to test a lot of people say, ”Oh! I nailed that when I followed his fingers.” No, that’s not what he’s looking for and when we get into court, he’s not going to say you nailed it.

So, it’s best just to politely decline to do this because that’s a rational thing to do.

He will ask you if you want to blow on a handheld portable breath test which is not admissible. The results of that are not admissible in court so, you can do that one or not to do that if you think you’re borderline if you think you might blow under, if you gotta figure, if you a fairly low amount to drink then there’s not really any negative to blowing the portable breath test on the scene unless you’re under 21 years of age because then, any readings going to be able to be used against you, a positive or negative result they just can’t use the number…

So, in that sense you might do that and if it’s a wise veteran cop who when you blow 0.08, 0.09 he knows you’re borderline and he may let you go. He knows he needs cause.

So there’s no negative to blowing that (breathalyzer test) and when you hear people talking about being penalized for refusing to provide a breath sample … that’s later, that’s if you’re arrested and taken to the jail then that is an evidentiary test. It can be used against you and you do have the right to refuse that but there are some other more complicated factors to take into account on that.

What Happens If You Are Charged With A DWI In Mecklenburg County?

Q: What Happens If You Are Charged With A DWI In Mecklenburg County?

If you’re charged with DWI, not yet convicted but charged there is an order that is entered by the magistrate if you blew over the limit or you refused to blow, that takes your license for 30 days immediately.

So, when you walk out of the jail, they have kept your license and your revoked for 30 days. The legislature set up two ways to deal with that. You can be eligible for a limited driving privilege after serving 10 days of not driving. You have to jump through some hoops, you have to get a substance abuse assessment from a licensed assessor and you have to get proof of your insurance. You’ll need a lawyer to help you through that part of you. You gotta draft some documents and present them to the court and get that done after 10 days, pay $100 filing fee, there’s all that to go through.

In Mecklenburg County, there’s actually a nice procedural trick to use. It’s all legal, it’s in the statute but you can. There’s a way that I can petition for a hearing and under the right circumstances actually, get your license reinstated very quickly.

And without having to go through all this limited driving privilege process without having to wait the 30 days, you get your license back and that revocation is rescinded. So, that’s something that’s not available in other counties is a little quirk of how our system works.

But that’s the immediate urgent problem typically for most people when you get pulled over is that 30-day civil revocation. The next thing that will come is if you refuse the breath test you’re going to get a letter from the DMV that says effective such and such a date and it’ll be ten days ahead of the date that the letters issued for some reason mail from the DMV Raleigh you get it, you’ve got three or four days left before the revocation begins and against it. It begins at 12:01 a.m. on the date of the letter. So, your last opportunity to do something to save yourself is the day before the effective date because it’s one minute after midnight and so what you have to do is you have to request a hearing with DMV before that revocation starts.

And if you do that then that stops the revocation and then there’s a hearing process that you go through DMV but during that time while you’re fighting it, you keep your license and the legislature and their stupidity implemented a fee system for getting hearing before the DMV.

So, you have to pay $450 with your application for the hearing in order to keep your license. So, that’s unavoidable at this stage there’s, I’m waiting for the right opportunity to challenge that I think it’s unconstitutional the way they do it, the way they implemented that but that’s, you know. You don’t want to be the one having to fight that.

And for now, that’s what it is. So, you have to have $450 within those few days after you get that letter from the DMV in order to save you from those six months of not being able to drive, right away. So, it’s a very, there are some ways to win that hearing it’s difficult to win that hearing like I said earlier but at the very least, it buys you some time because then you can try your DWI and there’s a one-year revocation for a first offense DWI, there’s a one-year revocation for the refusal if you get hit with that.

The good news is they will run concurrently. So, if you get the letter from DMV and you don’t challenge the hearing and that revocation starts and then you don’t go to trial on your DWI until a year later and you get convicted then you will suffer two years of revocation. So, even if you don’t win the refusal hearing it’s good to postpone that while you deal with the DWI because if you lose them both if they start on the same day they will end on the same day a year later. So, you only suffer one-year revocation. So, it’s smart to challenge it and like I said, a lot of times there’s ways to win that as well.

What are the estimated costs of getting a good attorney?

Q: From a price standpoint, what are the estimated costs of getting a good attorney like yourself to be able to represent me if I end up getting a DWI?

You need somebody to navigate it for you and make sure you have your chance to get your best result.

Q: What Are The DWI Attorney Fees Involved?

The garden variety minimum kind of case is $2,500 without court costs.

It’s a flat fee so it doesn’t matter… I don’t have any financial incentive to do anything other than trying to win your case. I’m not gonna postpone your case just so I can charge you more money. It’s not that, it’s a flat fee. And for some people that’s, you know, for most people that would big chunk.

So, the good news about this taking so long to get, to expose through the system, is that it gives you some time to let people spread it out some.